Land of the ancients – the Colorado Plateau

From Arches National Park we headed south and crossed the border from Utah to Colorado. The Colorado Plateau is an enormous upland with towns at 5,000 to 6,000 feet (1500-1800m).

It is still dry country, though large scale irrigation schemes for crops of alfalfa and pinto beans mean that the area looks pretty green.  While we are driving there was a sudden thunder and lightning storm with hail so heavy that we have to pull over.  We are on our way to Mesa Verde National Park to see the remains of the Puebloan people who lived on this ‘green table’ several thousand feet above the plateau (at about, 2,400m). People have lived on the plateau for about 12,000 years (the prey of the early hunter gatherers included woolly mammoth) and started settling at Mesa Verde in about 600 AD. They grew corn and squash (and beans after they developed pottery which meant that the could cook beans) and lived initially in pit dwellings which evolved into above ground villages. In about 900 AD they began building cliff dwellings and while there is evidence of all the different building types on the mesa it is the cliff dwellings that are the main draw-card.

To see the best ones you need to go on park ranger led tours which are really good. What was apparent from the two tours that we did (Balony House with Ranger Bill and Long House with Ranger Jo) was what amazing crafts-people the Puebloans were, the stone work is incredible and the pottery shows great skill and is beautiful as well as functional.

We loved Mesa Verde though it was hard to sit and quietly contemplate because of the large number of people. A highlight of our tour of Long House was Ranger Jo telling us that at weddings mud balls were thrown for good luck – mud being a combination of two very important things – water and soil. We could see the splats made by the mud balls and then Ranger Jo invited us to look up and there was a hand print which had been made high up on the rock wall – breathtaking!

Next we headed north over 10,000 & 11,000ft mountain passes to the old mining town of Silverton. We had intended to camp at Molas Lake nearby but when we arrived we saw a sign saying ‘no alcohol in the campground’ which, of course, wasn’t going to suit us. It wasn’t a great campground anyway and the showers were an additional $5 per person. Silverton (popn 600) is a national historic area and is amazingly well preserved. The main road is sealed but none of the side streets are. Gold was discovered in the 1860s and the area opened up for mining in 1874 after negotiations with the resident Utes. I can’t imagine that the outcome was favourable to the Utes and about ten years later they were expelled from Colorado altogether. 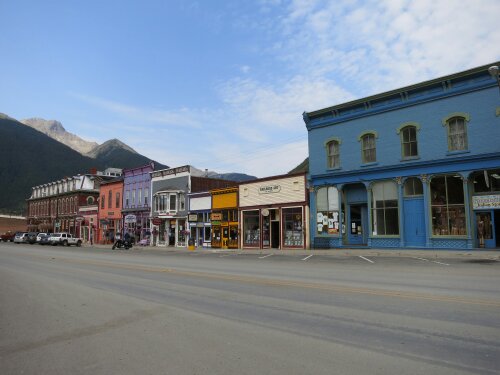 Quite a few old movies scenes were filmed in Silverton (Run for Cover, Maverick Queen, Ticket to Tomahawk with Marilyn Monroe) and Wyatt Earp dealt cards at the Arlington Saloon. We splashed out and got a suite at the Grand Imperial Hotel which was built in 1882 and still has the original pressed tin ceilings.

We had a bad mexican meal and then a lazy morning before setting off to see more rocks – the Black Canyon of Gunnison & Colorado National Monument.