A week in the Sierra Nevadas 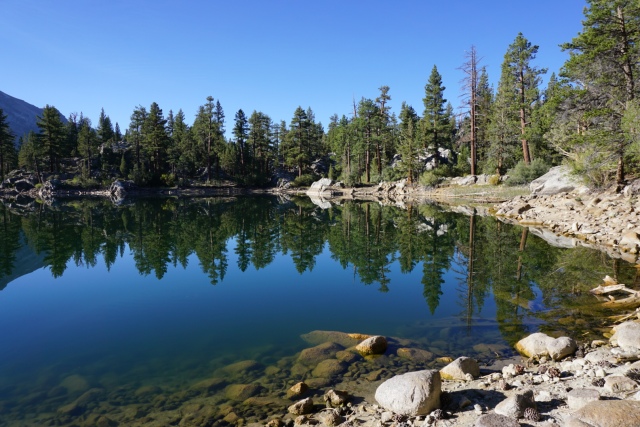 After a great experience picking up our ‘Minnie Winnie’ from Apollo RV at San Leandro (near San Francisco), and despite horrendous head-colds, Eddie and I bravely set out for the mountains. First we had to stock up with supplies so by the time we left the outskirts it was late but Eddie did a fantastic job driving to the maximum speed limits all the way so that we got to Calaveras Big Trees State Park campground by dusk.

Calaveras Big Trees State Park is in the foothills of the Sierra Nevadas and preserves two magnificent groves of giant sequoia – the world’s largest trees (in volume). They are native to the western slopes of the Sierra Nevadas and can live for up to 3000 years. The trees are truly impressive – the one in the photo below had a diameter of about 30ft. We’d struck a heat-wave in San Franciso (30 degrees instead of the 17 degrees it was last time we were there in August) and it was no cooler at Big Trees, in fact it was 31 degrees in the shade at 4.15pm. One the walk around the North Grove we saw a woman running (!) back to the visitor centre to get help for her mother and aunt who were 80 & 85 and couldn’t walk any further. A woman in another group commented to us that as there wasn’t mobile phone coverage ‘they’ should really have panic buttons along the trail which is a 1.5 hour basically flat walk. 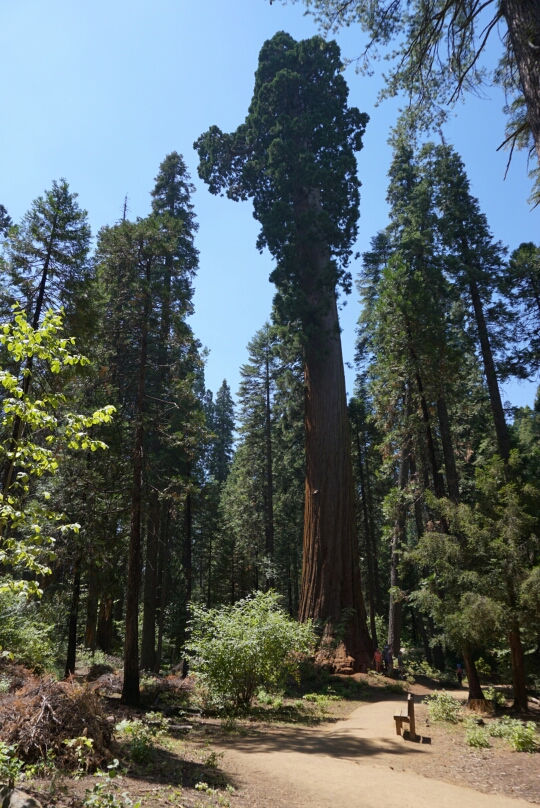 From Big Trees, despite warnings about narrow roads & tight bends, we headed along  state highway 4 up and over Ebbetts Pass which was a great drive through glacier sculpted granite country and volanic rock. It is not for vehicles over 25ft long though – we are 22ft long and quite tall and wide.

We were planning to visit the eastern side of Yosemite  National Park but the campground had been evacuated as a precaution against the plague. Two dead animals had been found with the plague and the danger was that fleas from the animals could infect humans. Thank goodness that we don’t have to worry about the plague in NZ – there are signs about it in all the campgrounds here. A major pesticide spraying operation was being undertaken at Tuolumne Meadows (where there is a 300 site National Park campground) and Mono Lake (more on that later) was awash with displaced RVers. It was very hot and we knew that we’d never find a campsite with shade so we decided to back-track and head back into the mountains, this time on state highway 108 over Sonora Pass.

This was our highest pass so far at 9628ft (2934m) and the big Ford engine handled it beautifully. It’s a long drive and the road must have been incredibly hard to build. The altitude was noticeable to us and it would be under snow for months while in the summer it’s very hot. After the discovery of Comstock Lode (silver & gold) in Nevada there was a rush east from California. Sonora Pass was opened as a pack track in 1862 and was a road by 1865 – an amazing achievement.

We stayed three nights at Dardanelle to try and let our colds run their course and then retraced our steps, this time stopping at the pass for a short walk along the Pacific Crest Trail which crosses the road at this point. Up here the landscape is volcanic as these rocks stood higher than the eroding glaciers that created the bare granite landscape at lower elevations. 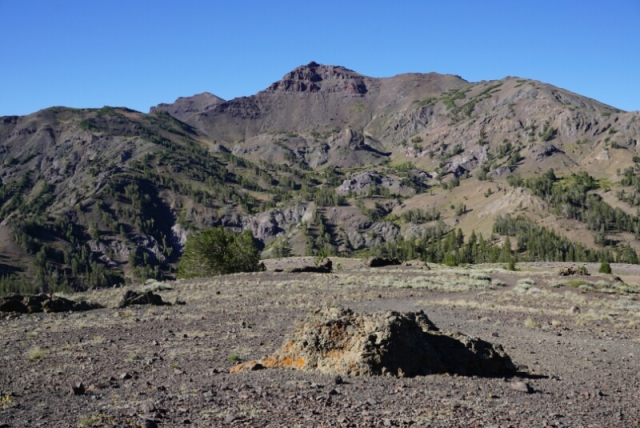 The vista from near Sonora Pass, note the volcanic rock 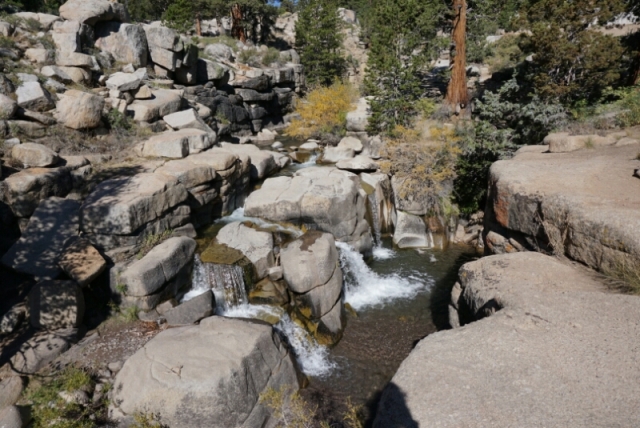 Walker River below Sonora Pass, back in granite country

We finished our Sierra Nevada experience with our first hike, leaving Leavitt Meadows at 7.00am to beat the heat. Our destination was Secret Lake (photo at top). We heard a siren as we were returning to the campground and later heard that there is usually an accident a day on the Sonora Pass road and that a team of paramedics is kept on standby at the nearby Marine Mountain Training Base.

Nearly everyone here is mad on fishing with the popularity of a campground pretty much solely based on its proxmity to water. We’ve seen people fishing surprisingly small streams and wondered why they bothered. The mystery was explained on our last morning in the Sierra Nevadas when what looked like a water-tank truck came through the campground. Our neighbour Ray explained that it was delivering fish for the river. We thought they’d be juveniles but no, they are big fish, really big fish! Eddie and I disagree on the exact size (of course) but they were probably about 500mm long. Eddie wished Ray good luck with the fishing but Ray said that it wasn’t fishing, he’d be ‘just hauling them in.’ We saw the truck again further down the road and they were scooping out net loads of really big fish out of the tank and dropping them off the bridge into what I would call a creek. I wonder how long they survive if they are not caught?

From here we are heading into Nevada which is in the grip of a serious drought, in fact I don’t think it has rained there since we last visited three years ago.

3 Responses to A week in the Sierra Nevadas