Yellowstone National Park was on our must-see list for this trip. We knew that it was going to be busy (it gets 3 million visitors a year) so we had a couple of cruisey days at Grand Teton National Park, which is just to the south. We cooked pancakes, used the laundromat and watched the squirrel near our campsite work from dawn to dusk stocking its nest with cones. We eventually roused ourselves enough to do a ranger-led walk to some small lakes nearby. When we turned up there was about forty people and I was wondering whether we should do it or not. I was wondering right up until the moment when Ranger Jamie told us that a grizzly bear had taken down a male elk (wapiti) near the walk and would be guarding the carcass. As usual we learned heaps from the Ranger although the pace was torturously slow and Eddie & I had to go for a brisk walk afterwards (with our bearspray!) 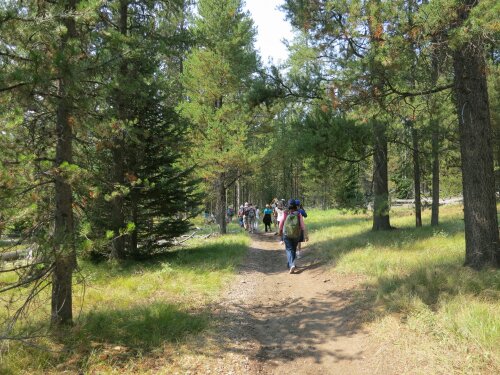 Yellowstone (America’s first national park in 1872) has the world’s highest concentration of geysers and we were amazed by how extensive the area of geothermal activity was – you drive through miles of it. First up was the West Thumb Geyser Basin which is on the edge of Lake Yellowstone so that makes it very picturesque. Unfortunately the ever present haze from the millions of acres of forest burning in various states meant that we couldn’t see the full extent of this enormous lake. 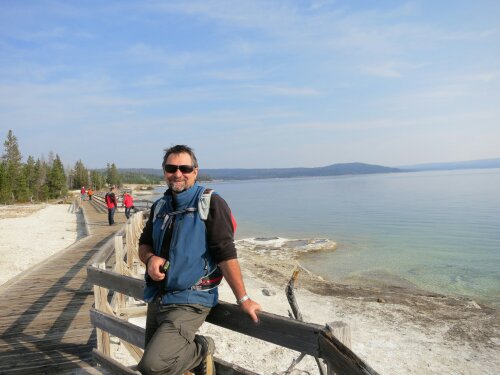 We saw quite a bit of wildlife; a coyote, yellow-bellied marmot, bald eagle, golden eagle, osprey, elk, loads of chipmunks and squirrels but the thing that we got closest to was bison – specifically some lone males who were plodding down the road at a couple of locations. They are totally unfazed by the traffic (which is considerable) and you have to slowly ease past them. Another one (that I didn’t get a good photo of) was walking right down the centre line. 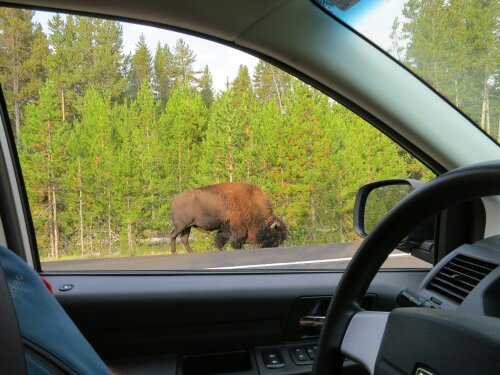 We spent several hours walking around the geyser basin near “Old Faithful”. We started with Old Faithfull which erupted at nearly exactly the predicted time (hence the name) which its been doing for over 150 years. There were mud pools, bubbling springs, spurting springs, geysers and lots of people but it was definitely worth seeing. 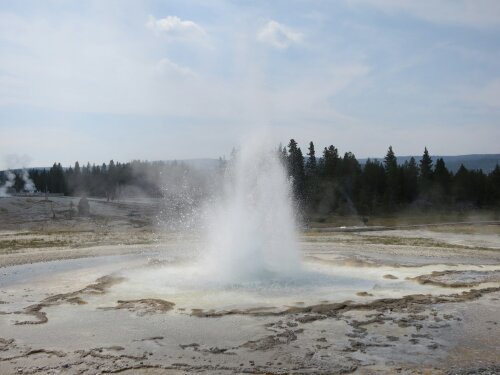 Next up was the much photographed Grand Prismatic Pool. The signage at Yellowstone wasn’t that great and we ended up in the wrong carpark but it turned out to be a wonderful mistake. While we didn’t get close to the pool we were able to walk up a hill and get a fantastic view. Another couple had done the same thing and took our photo – nice! 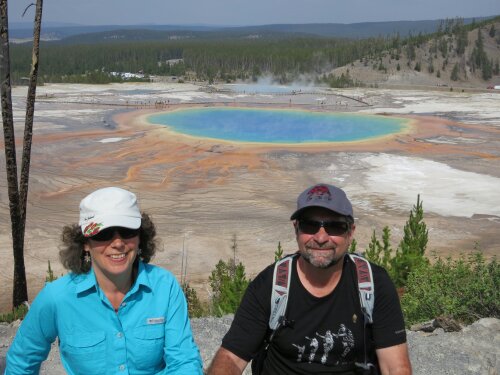 The next day we went to Mammoth Hot Springs. On the way we stopped at Roaring Mountain which was an unexpected delight. The side of the mountain is coated in white and vents are gushing steam. What is really amazing is that, because the steam is coming out under pressure, you can hear it roaring. Brilliant and hardly any people bothered stopping. 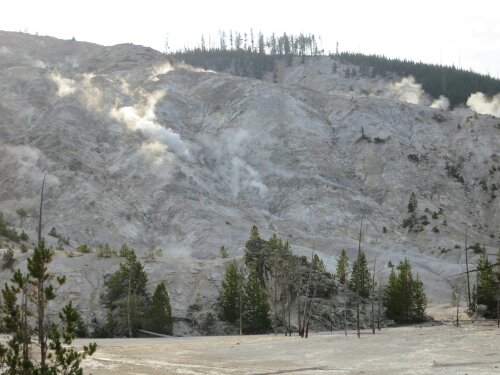 Mammoth Hot Springs include a series of terraces (smaller versions of NZ’s famous, and sadly gone, pink and white terraces). Along with the boardwalks there was a driving loop that we thought would be easier to walk – I think some people found us stranger than the springs. 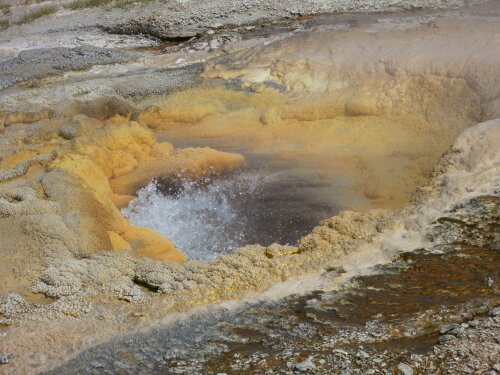 After Mammoth we looped back to Canyon Campground (there is a lot of driving to do in Yellowstone) and the next day explored the Grand Canyon of Yellowstone. We walked to lots of viewpoints on both sides of the river and did the metal staircase which takes you down about 300 steps to a viewpoint. It is actually quite a haul back up and we felt the altitude though not as much as some. A family of Mormons, who all looked very fit, scampered up in front of us. I heard a woman on the way down saying to her son, “If a bunch of girls in dresses can do it then you can” and smiled to myself as I expect that the girls were way fitter than the boy and the dresses didn’t seem to slow them down at all. 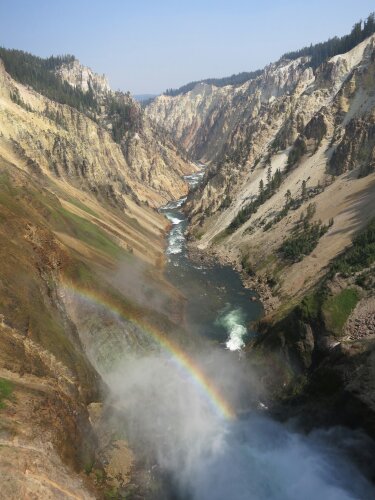 The Grand Canyon was simply stunning – such amazing colours. The crowds were a bit tiresome but occasionally we would briefly have a viewpoint to ourselves. The view seems more profound when it is quiet.

We had an action packed drive out of Yellowstone with another road-walking bison to navigate, a bison near the Museum of the Park Rangers (not much money being spent there), a golden eagle on a rock by the river and a bald eagle on a tree further down the road – too far away to get a decent photo of but great to see.

We spent the night in Montana, our sixth state, before heading our next geologic adventure, Craters of the Moon – “the strangest 75 square miles on the North American continent”.