Posted on September 5, 2012 by Julia Bradshaw

After Yellowstone National Park we headed down to Craters of the Moon National Monument in Idado which is described as the strangest 75 square miles in the US. When we arrived, after quite a long drive through land used by the Idaho National Laboratory (no admittance anywhere), it was hot and windy. It was also really hazy but more about that later. The lava beds were created by an eruption 2,000 years ago and are really fantastic. Folds of cooled lava (see photo below), cinder cones and splatter cones cover the landscape for as far as the eye can see (especially at the moment). Most of the area is rough and sharp and would be impassable without the roads and tracks that have been built. 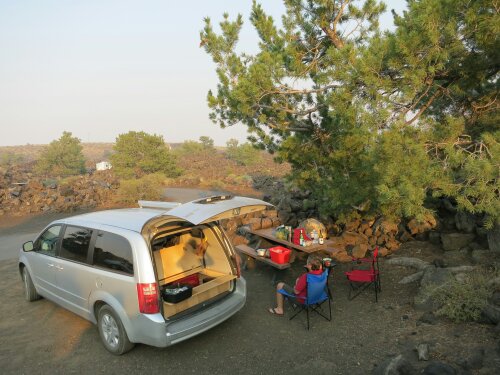 The campground was pretty stark but walls of lava have been built up around the various sites to create some privacy. We camped next to a gnarly limber pine which despite the lack of any other nearby vegetation still had the ubiqitous squirrels and chipmunks. It is a relatively small park but obviously well loved by the staff, the (flush) toilets were spotless and the toilet paper had even been perked! 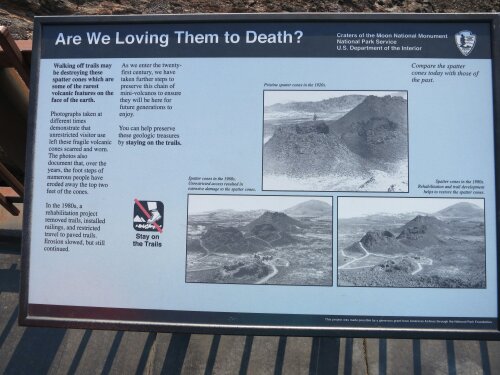 We did a couple of short hikes (Eddie’s broken toe is doing well) which had some thought provoking interpretation – at some of the sites we have been to there has been a real problem with theft and damage. The ethos of the American National Park system is to make visiting really easy (you can usually drive to all the best sites/views) but this obviously has repercussions.

By the time it got really hot we were on the road north to Sawtooth National Recreation Area. We stopped in Ketchum (a winter ski resort town) where we struck the rudest Americans we have come across – fellow shoppers in the grocery store. This was a surprise as so far almost without exception people have been amazingly polite and helpful. I have several times wondered how they cope with the service in NZ.

As we drove north the ever present haze turned into serious smoke and at one stage I it was so bad that I didn’t think we’d see the Sawtooth Mountains at all. Thankfully it cleared a bit by the time we reached Little Redfish Lake and I got a glimpse before we settled into our streamside campsite.

We did a nature walk in the morning (and saw some kokanee salmon) before heading up to the lake for a view, only to be told that we had to pay $5 to enter the day use (picnic) area. Despite being in a national forest (which we have a pass for) the concessionaire was adamant that we had to pay the fee even though we only wanted to stay for a few minutes. Indignation at having to pay to view public land kicked in and we returned the offered envelope and drove back to the visitor centre and walked (sneaked) back to the lake for a view.

We headed further north and passed through the town of Stanley and saw one of the sources of the haze. Just north of the town a wildfire was raging. It had already been burning for two weeks (burning 19,000 acres a day) and was uncontainable. It was moving so fast that it was too dangerous to drop in the smoke-jumpers who work to try and cut off the fire. All that is possible is to try and protect any structures in the fire’s path. There are at least two more fires like this burning in Idaho and many others in the surrounding states.

Just outside of Stanley was a temporary fire fighters camp for at least 1,100 firefighters. They don’t expect to have the fire contained until the beginning of October when the first rain/snow comes. It amazes us that despite the extreme fire risk you are still allowed fires in the campgrounds.

We carried on to Stanley Lake which we instantly liked and so camped there for the night. In the photo below our campsite is at the right. We had a thunder and lightning storm just before dark and we heard later that lightning had started a few more fires near the Sawtooth Mountains which fire crews were working to put out before they took hold. The Forest Ranger that we talked to was worn down but philosophical. People in the towns were mostly concerned about protecting human life and property but we felt sad for the wildlife too. The losses must be huge. 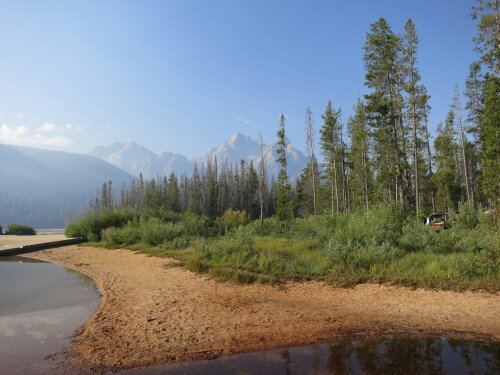 I was reluctant to leave Stanley Lake but was placated with the plan to return someday with our inflatable kayaks. As we travelled the scenic byway towards Boise (pronounced boysee) we passed multitudes of camping areas – it is a great area. We had lunch in Idaho City (population about 500), a goldfields town which has a delightful blend of heritage and run-downness. Idaho is known for its potatoes and we’ve bought Idaho potatoes from the supermarket but with our lunch (at Calamity Jayne’s) we had the most amazing ‘fries’ and I don’t even like chips. Long hand-cut well-fried potatoes, yum!

We finished off our day with a visit to the World Centre for Birds of Prey (near Boise). Great exhibits, a breeding programme for the endangered American condor and we met a rare Kenyan falcon – much smaller than ours, totally human imprinted and fascinating. We also saw an Arctic falcon (the world’s largest), a Panama eagle and Wally, a great horned owl – the only owl with orange eyes. Wally is a big bird and was hand-reared. Staff didn’t know that he could fly until during one of the ‘meet a raptor’ shows he suddenly flew into audience, crash landing into a woman’s lap!

After the birds it was time to get onto the interstate, (Eddie loves these because the speed limit is 75 mph/120 kph) navigate the rather diabolical traffic around Boise and head to Baker City in Oregon where we were planning to stay in the town’s heritage hotel, the Geiser Grand. 🙂