You can’t pump your own gas in Oregon

When we arrived in Baker City, Oregon, we managed to get a ‘parlour suite’ at the Geiser Grand Hotel. This fantastic old hotel, which was built in 1889 during a gold-mining boom, was going to be demolished to make room for a carpark but was rescued, restored and re-opened in 1993. The view in the photo is looking down to the dining room from the second floor (where our room was) and at the top you see the amazing stained glass ceiling which is the largest in the northwest. The hotel is very ornate with lots of crystal chandeliers and we loved it! So do lots of other people as the hotel is booked out despite the very slow tourist season that is being experienced in America.

After a shower to wash off all the dust we had a very civilised dinner in the restaurant before enjoying the luxury of a bed wider than 1.2m. Next morning we headed out to the National Historic Oregon Trail Interpretation Centre. I knew that settlers headed west to Oregon to find land but otherwise I’m pretty vague about the story and significance of the trail. The Centre turned out to be a great way to rectify my ignorance. We can tell that the day was going to be hot so we started with a walk down to see a section of the actual trail and some historic wheel ruts. The heat, the dust and the tiny wagon certainly made us start thinking about the travellers’ trials – it turns out that we were visiting at pretty much the same time that they passed this spot, if all had gone well during their journey.

Inside the centre we followed a kind of time-line of the trip which started with some marvellous stuffed oxen and then moved on to details of the dust, deaths and experiences of those who made the trip. It seems that the trip wasn’t so bad for men who experienced quite a lot of freedom and camaraderie during the trip (and might have occasionally had a good time) while for the women it looked like an unending nightmare as they worked endlessly to maintain standards, trying (hopelessly) to keep everything clean, cooking meals on fires fueled with ox dung and sage bush, mending, sewing, caring for children and walking about 20 kms per day – the wagons were only for carrying their worldly goods.

The journey from the east took about six months and by the time they reached this point in Oregon they had nearly made it. About 400,000 people made the 3,200 km journey from the Missouri River from the 1830s to 1869 (when a railroad was completed) and the death rate was about four per cent. Especially poignant was the interactive next to a child’s musical instrument which invited you to consider whether you should take it with you on your trip. Initially it was a good idea because your child had something to amuse themselves with and could join in any musical evenings but it was no longer useful after the nine year old girl who owned it died on the journey.

After enjoying the luxuries of the Geiser Grand for another night we headed further West into Oregon. But first we had to fuel up and you can’t pump your own gas in Oregon. This is a state law aimed at preserving jobs and at Baker City it was fine, they filled the car, cleaned the wind-screen and you paid inside but at other places it was a bit farcical. At most gas stations you can card-pay at the pump and in a couple of cases you’d get out of the car, open the fuel cap, put in your card, punch in the numbers and then wait for the attendant to come and put the nozzle into the tank, then you’d wait for them to take it out before you could drive away. The good attendants (as in NZ) were ambassadors for their town, providing great information. Perhaps their wages should be subsidised by the local promotion association rather than through the higher price for gas – not that the price worried us, petrol was cheap!

Next stop was the Sumpter Valley Dredge, one of the largest in the USA. The dredge has been beautifully restored (see the after and before photos below) and was pretty cool – especially being able to walk around the machinery on what I can only think of calling the ground floor. No doubt someone will be able to tell me the proper term.

After Sumpter we drove along more forested roads before coming to the ranchlands near Prairie City. Here a sign informed us that ranchers helped ‘feed the nation, preserve open spaces and provide a habitat for wildlife’ although I think by wildlife they don’t mean anything that would eat their stock, such as wolves, cougars or bears. We were most impressed with the nearby Strawberry Mountain (an old volcano) and vowed to return.

Our next destination was the Kam Wah Chung State Heritage Site which is a one of a kind place which features the stone building that housed the ‘Golden Flower of Prosperity’. The stone and wood building was built in about 1870, before the town which now surrounds it, by a Chinese businessman and was later owned for many years by Lung On (an urbane businessman) and Doc Hay (a medical man). After their deaths the building was closed up and ‘rediscovered’ in the mid-1970s when it was opened prior to being demolished. Locals were astonished to find the place still looked as if the proprietors had just popped out and visiting the building is a truly OMG experience – especially for me. I have never seen such an intact view of the day to day life of Chinese businessmen. The store, the apothecary, the kitchen with its enormous wok and piped running water, the smoke scarred ceilings, it really is an exceptional site.

The nearby interpretation centre is really great too with information on the two remarkable men whose building it was. Naturally they were leaders of the local Chinese community (although they stayed longer than any of them) and acted as interpreters, bankers etc. I found the display (below) of a letter found in store and never sent very moving. I imagine that wife thought her husband had forgotten her.

We stayed the night at Clyde Holliday State Park which is a great spot, lots of tree, grass (very rare in the desert) and cheap firewood. Eddie couldn’t resist buying some and from then on he was hooked and we had a fire most nights.

Our last stop in this part of Oregon was the John Day Fossil Beds, one of the richest fossil beds on Earth. The Thomas Condon Paleontology Centre (named after the young minister who drew attention to the fossils in the 1860s) is brilliant, taking you through the 40 million years of the age of mammals using fossils and fantastic diaramas that show the different time zones and the wierd and wonderful creatures that lived during those times.

As we drove west we called in to the Painted Hills Unit of John Day Fossil Beds which are described as ‘a gently contoured theater of geological change’. It was really the wrong time of day to visit (evening is best) but the hills were still pretty stunning. They are the result of volcanic ash settling over the area about 33 million years ago and eventually turning to clay and rock. Geological forces lifted and faulted the strata and erosion by rain has exposed the different layers. The different colours are the result of different soil formation; the red is rusty iron minerals oxidised by long exposure, the yellow is a mix of oxidised magnesium and iron and the black marks are rich with manganese. All errors in this interpretation are mine! However they were formed exactly, they are rather fantastic. 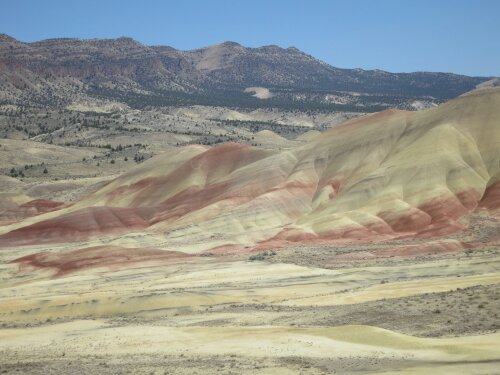 Unfortunately this is where our 5 month old Canon S100 powershot camera decided to stop working – which was very sad. We still had our waterproof Pentax but we were going to miss the versatility of the Canon. Despite our period of mourning we still needed to keep heading west for our next geology lessons in Oregon’s Cascade Mountains.